Landfills as possible sources of diseases 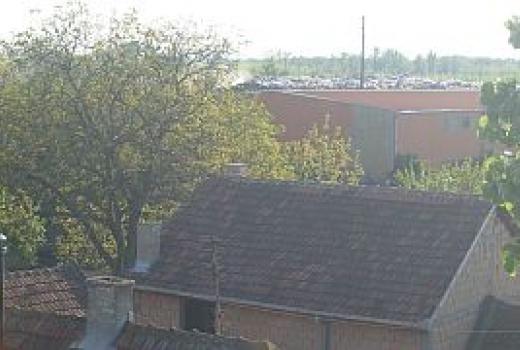 Landfills as possible sources of diseases

Tens of families fear that their families might have gotten some disease, since they are constantly inhaling the smells coming from the City landfill. For the past sixty years, the waste from the entire city has been deposited at the landfill, only a few meters away from their home. Every day, trucks owned by the public communal company ˝Higijena˝ deposit the various waste gathered from public and private garbage cans from residential and industrial parts of Pančevo.

A lady who lives in that part of the city says that life has been unbearable for the past couple of years, both early in the morning and in the evening, since the smoke coming from the landfill enters the house through the open windows. A bit stronger wind immediately blows tens of plastic bags and scatters them over the garden where this family grows vegetables. Her husband gave up fishing a couple of months ago since the river Tamiš that flows about 50 meters away from their home has started resembling a bog. He suffers from asthma and says that he often has a cold, feels weak and he is constantly feeling bad. Their twelve-year-old son, who also suffers from asthma, often misses school because of the inhalations and frequent colds.

Doctors from a near-by clinic do not know for sure whether the culprit for their feeble health is a weak immune system or the fact that they live near a landfill. Doctor Ana Mitrić, from the ˝Gornji grad˝ clinic in Pančevo, situated near the City landfill, claims that over the past couple of years, there hasn´t been an increase in the number of asthma victims, or victims of similar diseases, compared to other parts of the city. However, more and more people living in Pančevo are becoming victims of asthma and other diseases of respiratory organs. This is most pronounced with the preschool children. Not a single research to reveal the main cause for an increase in the number of asthma sufferers in Pančevo has been conducted so far. For decades, industrial plants have been polluting the air. The landfill in the heart of the city and heavy traffic are some of the elements that contribute to that situation.

Experts agree on the fact that landfill gases combined with other chemical substances jeopardise human health and the environment. Nenad Marković, an Environmetal Protection Engineer, points out that waste has been deposited at the landfill for many years, where it decomposed and was exposed to rain and snow. As a consequence, the hazardous materials from the landfill has been washed out and entered the surrounding soil and a near-by river. He says that communal and hazardous waste are often disposed of together. There are no data on the content and movement of the waste, the recycling level is low, local and regional plans for managing waste have yet to be adopted, and people´s awareness of the problems caused by waste is very low.

Zoran Marković, an architect, says that for years no one has assigned much importance the location of the landfills. It was only few years ago that people in Serbia started discussing and working on building sanitary landfills. According to him, decades-old layers of waste and its decomposition have affected the air, soil, water, plant and animal life quality, which have consequently affected human health.

Despite the fact that no research has been conducted to prove a direct link between the diseases that affect people of Pančevo and the closeness of the landfill, doctor Mica Sarić Tanasković, an ecotoxicologist from the Public Health Institute, is convinced that landfill gases can have negative consequences on human respiratory organs. According to her, great quantities of gases increase the pressure within the landfill which can lead to an explosion and dispersal of partially decomposed waste which is half-liquid and has a harsh smell. Nitrogen and sulphur oxides, polycyclic aromatic hydrocarbons, dioxins, furans heavy metals and dust are emitted from the landfill, polluting the air.

She believes that the landfill was not adequately built. Apart from solid communal waste, the waste from the hospitals and clinics has been deposited at the landfill for decades. According to Dr. Sarić Tanasković, until recently, the medical waste had been deposited without prior sterilisation. Animals and secondary raw materials collectors have free access to the landfill, and they are directly exposed to hazardous and harmful agents. Our interlocutor points out that rodents and insects contribute to the dispersion of harmful substances from the landfill.

Families that live in the vicinity of the landfill might be right when they claim that their problems could be mitigated or even solved by closing down the landfill, and depositing the waste on the newly-built sanitary landfill outside Pančevo. After 15 years of construction, the new landfill was built last year and citizens of Pančevo wonder why it has not yet been used.

The director of the public communal company ˝Higijena˝, Milan Bokšen, says that citizens are not aware of the fact that the new sanitary landfill is already being used. He claims that the workers from his company are conscious of the fact that the landfill is only three kilometres away from the city´s centre which qualifies it as a potential ecological threat.

˝It is up to us to reduce this threat to the minimum. The waste has been deposited at the new city landfill, 12 kilometres away from the city, for a year. However, people are convinced that this is not the case since no ceremony was held to announce the beginning of these works˝, says Milan Bokšan.

Bokšan says that parts, which are closed, are covered by a layer of soil and the greening process has begun. A few more layers of soil need to be added before the initiation of the greening process. Park, that is a green area, will be created in this area which cannot be used for other purposes over the following 20 or 30 years due to soil settling.

There are some tendencies towards beneficial use of landfill gas in Europe and around the world, while the gas from the landfill in Pančevo is freely emitted into the atmosphere. This gas is of sufficient quality to be used as an electric and thermal energy resource, if the necessary facilities would be built. However, the landfill gas´s quality and quantity measurements and testing were conducted four years ago. Unfortunately, this landfill has been used for over 60 years and the measurements have shown that the quantity of the landfill gas is insufficient for making the construction of facilities for exploiting it profitable.

The good side is that, for the past 15 years, there has been a strong tendency to deposit nothing but waste at the landfill. But Bokšan says that there is no way of knowing what types of waste have been deposited over the past 60 years.