Only National Park in Kosovo in Danger 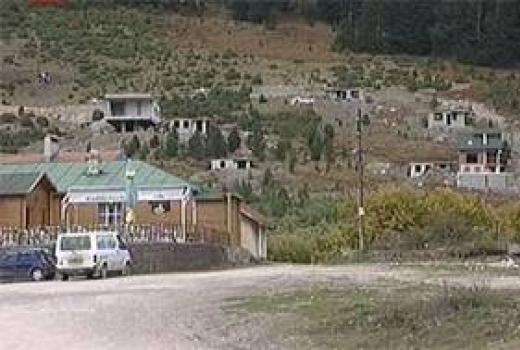 Only National Park in Kosovo in Danger

Illegal construction continues to flourish in Šar Mountains National Park. Production of organic health food, the one thing offered, dying out. Only a few environmental protection NGOs raising voices in opposition. Municipality has no adequate plan for utilization of area’s natural resources.

The locals of the Župa region near Prizren, part of whose territory is Prevalac and part of the Šar Mountains National Park, expressed their satisfaction that the Parliament of Kosovo initiated a discussion on the issue of Prevalac, expecting justice to be met and the national park zone to be protected.

All hell broke loose when the Municipal Assembly of Prizren adopted on November 26, 2006 a decision to build a “tourist village,” or 340 country houses, in the national park. National Park staff says that there are two concepts for the Prevalac site: an environmental protection concept and an economic development concept. “On the one hand there are those who support protecting the Šar Mountains National Park area by the state for its biological and ecological value and, on the other, those for whom constructing the tourist village in Prevalac would bring about economic revival. We shall seek a solution taking into consideration both concepts – protecting the environment and establishing sustainable economic development of the area.” Locals of Gornje Selo, who have been threatened on several occasions merely for wanting to legally defend their property, disagree with both of these concepts. Particularly interesting is the case of Bajro Bajrami, the now former village president: “This village was once a municipality, on the basis of which the municipality considers this territory – which is our property – their own. In 1939, the Kingdom of Yugoslavia confiscated this land. However, it was retrieved in court. Before the war, during Milošević, the same thing happened again, so we sued once again in 1989 and got it back, so this territory is the property of Gornje Selo and not the Municipality of Prizren. I am very sorry that the Municipal Assembly of Prizren made no attempt whatsoever to contact us seeing that we own the land. We tried several times to do something with the former municipal administration headed by President Ekrem Krueziu. However, doing anything concrete was never possible. A few international officials tried to protect the area and to oppose illegal construction in this area, but they failed. It’s a pity because this is the only national park in Kosovo, and it’s really beautiful. As locals, we have preserved it for centuries. It was never devastated at all, and now catastrophic things are happening in such a short time. If we destroy it now, it will hurt not only ourselves, but entire Kosovo, for Kosovo is on the losing side here.”

“We put our hopes and trust in the Kosovar institutions to pass the right legislation and change things,” said Halim Ahmeti from Gornje Selo. Šar Mountains National Park authorities are in constant contact with the Ministry of Environment and Spatial Planning and expect the soon-to-be-adopted spatial plan not only to protect the Šar Mountain’s natural sights, but also develop economically the area it spans across. However, the fact that this issue of significance to the state was more the center of interest of the international community than Kosovo’s state institutions themselves is of some concern. In May 2008, the Ombudsperson Institution of Kosovo issued a report stating that the Municipality of Prizren broke existing laws (the Law on the Šar Mountains National Park, the Law on Spatial Planning, and the Law on the Preservation of Nature) by erecting country houses in the Prevalac location which is considered a national park. The report, referred to the President of the Assembly of Kosovo, the acting Ombudsperson recommended that the Government of Kosovo take necessary measures to stop further construction. The Ombudsperson Institution also gave a recommendation to the Assembly of Kosovo to establish a special committee which ought to, in cooperation with relevant institutions including the Ombudsperson Institution, carry out a comprehensive evaluation of the situation created in the national park. The committee ought to also report to the Assembly of Kosovo on the irregularities committed and identify necessary measures to be undertaken in order to protect the national park and secure that it is restored to its original condition.

The Šar Mountains present something of an open-air glacial relief museum. Ice circles, white firns, massive rock walls, rivers of rock, vertical cliffs, deep ravines and canyons, and 70 glacial lakes known as “mountain eyes” are its special attractions. The number of streams in the Šar Mountains is among the highest of the Balkan’s mountains.

This is the site of numerous cold springs, brooks, high-altitude quagmires, and mountain rivulets flowing down cascades and waterfalls to the valley and into the Prizrenska Bistrica river and the Lepenac springs. The Šar Mountains are home to about 1,800 plant species. The most significant of them are tertiary and glacial relicts, as well as 339 Balkan endemic species, 20 of which are local species endemic to the Šar Mountains. The National Park has registered 190 plant communities whose character varies from Mediterranean/sub-Mediterranean in river valleys to the subarctic in the highest of mountain tops.

Endemic relicts such as the Ramonda serbica (Serbian phoenix flower) in karst ravines, forest communities of Balkan endemic relicts of the Bosnian pine (Pinus heldreichii), Macedonian pine (Pinus peuce), and the shrub community of the alpen- or snow rose (Rhododendron ferrugineum) are particularly invaluable. With 147 species of diurnal butterflies, 45 species of amphibians and reptiles, over 200 species of birds, and 32 species of mammals (excluding bats), the Šar Mountains are in the order of the richest areas of fauna in Europe. The Bearded Vulture, the Griffon Vulture, Peregrine Falcon, Golden Eagle, and the Capercaillie are special attractions. The vast expanses of the Šar Mountains are also home to endemic and relict species of small rodents, such as the Balkan Snow Vole, the European Pine Marten, the Beech Marten, the otter, wild cat, lynx, bear, and the chamois. 45 medieval churches and monasteries erected during the period between the 12th and 16th centuries presents a rich cultural and historic heritage. All the aforementioned facts were cause to apply in 2007 to UNESCO to place the Šar Mountains National Park on the world heritage list.

Nowadays, if after sightseeing in ancient Prizren you head down the Bistrica Canyon towards the Šar Mountains National Park and stop in the first village along the way and ask the locals about the situation, they will shrug their shoulders. They know nothing of what is going on in their environment except the fact that illegal construction is still flourishing and illegal waste dumps are growing, a sorry sight for visitors who would pause for a moment and change their opinion if the Šar Mountains National Park were presented as an oasis of beauty and a god-given site for vacation. Even the most ozone-abundant spaces won’t have a convincing enough effect on visitors. Instead of an ethnic village, they are met with modern houses that do not belong in a national park. Modern restaurants without organic food that ought to be available precisely in this area don’t serve famous Šar cheese or Šar lamb anymore. Everyone agrees on one thing – the natural resources hidden in the buxom of the Šar Mountains are a sacrosanct treasure not used in the slightest. The few stone houses left in our inheritance by our ancestors, dating all the way back to the Balkan Wars of 1912, instead of being remodeled into ethnological museums or “ethnic villages,” are all destroyed and replaced with distasteful concrete. Thus the country houses of the envisioned “tourist village” are constructed according to no plan, without urban planning. Prescribed norms for the exterior of a weekend-getaway neighborhood in national parks and construction material used are not followed. What is left for the people is a single treasure – clean air that remains unpolluted with its rather high concentration of ozone.