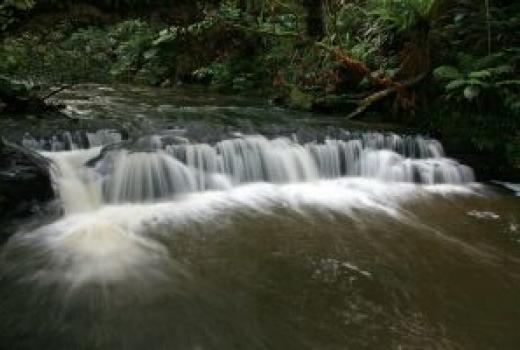 Water management has become one of the leading topics in South East Europe (SEE). This is mainly due to outgoing process of EU accession in these countries (Serbia, Albania, Montenegro, Macedonia...). This text will try to show what SEE countries did in water management so far and what are their future plans...

Maybe one of the best idea of what the problem is (can be) gave an old lady that lives close to Danube river, near the Serbo-Croatian border: Magda J. (78) from Ilok, Croatia: "I used to have a very nice childhood in this house, listening to birds and breathe fresh air when I wake up. I was expecting to have the same for my children/grandchildren. Instead, every day there are talks about whose part of Danube it is (part of Danube close to Sarengradska ada is still a dispute between Serbian and Croatian authorities). I think that water management should also include this, because I have authorities of both countries coming at my house from time to time to measure the distance between my house and the river and to ask questions.

This problem seems small in comparison with the problem that can occur at Drina River if the plan Serbian authorities’ have-to build hydro power plant with the Italians comes into action. "I will have to move from my house, if they build this hydro power plant. This house has been in my family for more than 60 years, it survived the WWII and the war in the 1990's”, said Milan P. from Visegrad, BiH to this journalist.

The plan for building the nuclear power plant on Shkoder Lake in Albania doesn't deserve any comment, since this week it has been 24 years since the catastrophe in Chernobyl.

In Serbia in charge for water management is Ministry of Agriculture, Forestry and Water; Resources Management-Directorate for Water (also the ministries for health, science, local governance).  900 mil. Euros needs to be invested so the wide gap between financial demand and actual investment would be lower. Main problem in Serbia is low price of water; 0, 3-0, 4 EUR/m3. Several % of companies that pollute have treatment facilities. National and international investments need to be higher. Water Resources master plan was adopted in Serbia in 2002.

In Montenegro in charge is ministry of tourism and environmental protection (also health, economic development). Law of water that was adopted in May 2007 has been harmonized with EU Framework Directive 2000/60/EC. Law on Water Supply and waste management is in preparation. Finance mechanisms that are helpful are: local, budget resources, ministries capital budget; int'l organizations, banks...

Macedonia's main partner in water management is Switzerland. One of main problems is Breganica basin, which needs a few millions of Euros of investment.

Albania's Ministry of Agriculture and food is in charge for water management. Water quality is poor, lackages and illegal connections are frequent. 40% of urban population has a sewage connection and sewerage treatment continues to be virtually non existent.

Losses in water distribution systems have been reduced by 6% since 2001, while revenues increased by 9% for the same period. In December 2004, the collection rate reached 75%. Many enterprises have achieved a collection rate of 75% and some as high as 97%. Despite the positive trends outlined above, water supply remains a problem in Albania. Albania should focus on developing its water management strategy, including approximation with European standards, determining investment needs, and improving ministerial and local authority capacity to manage water and sewage issues. Concerning nature protection, in October 2004 Albania adopted a law making the Vjose-Narte wetlands a protected area and in February 2005 it passed a law establishing.

Decentralization and privatization in the water sector continues. During the reporting period, some positive steps have been taken under the National Water and Sanitation Strategy to improve management of water resources, including the introduction of bulk water metering, the setting up of a computerized billing and collection system, the transfer of responsibility for tariff-setting to local government authorities (as of March 2005) and the establishment of a separate department within the General Directorate of Water and Sewerage to deal with drinking water and sanitation issues in rural areas. In March 2005, Albania passed a law on norms relating to effluent discharges, according to which no business which discharges wastewater effluents will be issued with a permit to do business.

Privatization of power companies and entering of private sector is an ongoing process in SEE. It’s expected that private sector will bring the new investments in the power sector and building new power resources (mainly hydro power plants). These investments can cause problems. New hydro power plants can cause serious devastation of the nature (Montenegro) and potential disaster to the cities (Shkoder, Albania).

Having in mind the above mentioned things, there is still a lot work to be done, but the main thing is to have the governments and the people realize that no EU accession talks will make the things better in the above mention countries if the “locals” don’t realize that it’s for their own good.