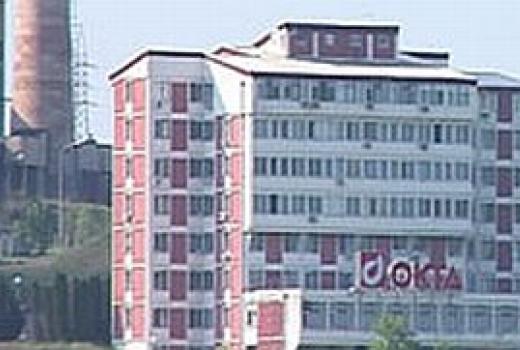 OKTO refinery is one of the biggest giants in Macedonia, and is of great importance for the Macedonian economy. On the other hand, it is one of the largest pollutants to the environment nowadays.

Tranquility which felt when I was a kid and when I was running with a smile on my face and breathed clean air, this is today the place of OKTA oil refinery. Unfortunately, I do not dare to allow my child to go outside to play alone or go to play with his friends, us Ace Acevski s.Bujkovci.

“It is not possible to breathe, what to tell you. Every morning it is not possible to go out. We live close to the refinery, we cannot stay outside, and there is strong odor. They installed filter, but it still smells of gasoline, sulfur. Myself I cannot describe the odor. Simply it smells, it is unbearable,” added Atze Atzevski from Buikovich village.

OKTA is the only refinery for petrol in Republic of Macedonia. It is located outside of capital Skopje. The company started to operate in 1982. On the top of the company is Zambros Zorgopullus, General Director. Somewhere from 1999 it is owned by the Greek company Hellenic Petroleum.

OKTA, with its annual capacity of 4 million tons, has possibilities to satisfy the needs of the citizens of Republic of Macedonia equal to 1,25 million tons processed crude oil.

According to the financial reporting end of December 31, OKTA petrol refinery JSC – Skopje has annual export of about 465.845 MKD.

OKTO is one of the biggest giants in the Republic of Macedonia, and is of great importance for the Macedonian economy. On the other hand, it is on of the largest pollutants to the environment nowadays

We obtain prosperity with OKTA, but we lose environment.

The pollution, emitted by the refinery bears negative impact on the quality of air and the land around the site; it causes irreversible damages to the present and future generations. Besides, the refinery causes unbearable stench, which can be felt within a distance of kilometers around it.

“The technical defects are removed and we are satisfied with the achieved agreement with the Ministry of Environment,” said Zambros Zorgopullus, General Director of OKTA Refinery.

“OKTA succeed to meet the requirements of the citizens and to reach at least the minimum standard requirements for clean environment, add the General Director of OKTA Refinery.

During our visit, indeed, the people leaving within the surroundings of the Skopje refinery are right. Really it smells there.

When we called the Ministry of Environment, it defended itself with the achieved agreement. “OKTA must install all the necessary filters, to carry out repairs of the old wastewater stations and in all cases, to install monitoring stations for control on the discharges, explains the Minister of environment, Neshat Jakupi.

We have nothing against OKTA, we want clean environment.

“Yet, we want the channel to be cleaned up and piping system to be become suitable for the wastewater flow; four monitoring stations are foreseen, we need to appoint their location, and their construction will start. We are planning to reduce the polluting gases emissions in the atmosphere, i.e. the desulfurization device to start non-stop operating.” For 15 days people died 4-5, day after day. In the last two years the death rate in the villages increased by 20 to 30%, increasing the number of stillborn babies”, said Milivoe Stankovski, Chairman of the organized group.

“Because of our complains and requirements, you by yourself can feel the stench…. What they do is harmful to us, and we can do nothing but to change our living place”, added Stankovski.

On the other hand, the State Inspectorate for the Environment said that any emission of black clouds, smoke or muddy waste water does not mean pollution. They claim that OKTA’s desulfurization device operates, and that the residual sulfur dioxide is transformed into liquid sulfur, which is transported to Greece and utilized in the chemical industry.

And if, the Macedonian parliament adopts environmental laws in compliance with the European standards, these in turn are not properly implemented. It is pity that they exist only on a paper. All of us are to be blamed for the elementary catastrophes that recently became more frequent. Let’s all of us become more conscience and bring to our better tomorrow.