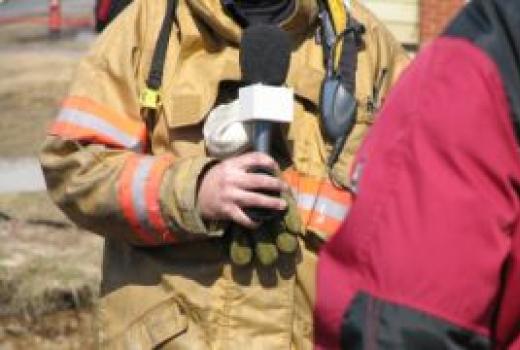 Journalists covering traumatic events have an important role to play, but must be sensitive and respectful to those whose stories they tell. A reporter shares first-hand accounts of covering disasters.

Three days after a fire with the ferocity of 1,500 Hiroshisma atomic bombs ripped through the Australian state of Victoria, claiming 173 lives in February, 2009, a volunteer firefighter stood slumped by the burnt shell of a car, rolling a cigarette.

His name was Mark (‘‘no surname, please, I’m a prison guard by occupation’’) and he was taking a break from putting out small fires in and around his native Flowerdale, a small town in the mountains north-east of Melbourne.

The burnt car, outside the tiny local fire station, was his and, as he would tell us later, he had also lost his home while saving other people’s from the blaze.

While covering what became known as the Black Saturday bushfires for Australia’s daily newspapers The Age and The Sydney Morning Herald, a photographer colleague and I drove to Flowerdale to report on the army inspecting properties and searching for victims’ remains in a village where entire streets had been reduced to mounds of ash.

The Dart Center for Journalism & Trauma has published a guide for journalists which gives tips on working in disaster zones, interviewing, writing and taking care of yourself. Read more here.

We met Mark on our way out of the ghost-like town. He asked us for a lighter and with shaking hands, lit his cigarette. He was clearly distressed, so we stopped to talk — no cameras, no notepads.

Weeping, Mark told us of a blue-eyed boy, aged about 10, whom he found deceased near a car on a nearby road. Next to the boy were the bodies of his mother and brother.

And then he said: ‘‘I want you to write about this because nobody knows what happened to our town and I want everybody to know we did everything we could to try to save it. But there was nothing anybody could do — it (the fire) was the fastest thing I’d ever seen’’.

With Mark’s permission — and without his surname or photograph — we published a story that would later be reprinted around the world.

Mark later agreed to participate in The Age’s bushfires anniversary project, so we followed him for a year, meeting every couple of months to talk about how he and his community were recovering from the fire.

In the week after our first meeting, Mark would later tell us, every TV station in the country wanted to interview him. A commercial television program even offered him money for an ‘exclusive’ interview, during which cameras would follow the firefighter’s meeting with the father of the deceased boys. The proposal came with a condition that he could not talk to us.

Mark turned down all offers, telling us that apart from not wanting to be photographed for professional and security reasons, he felt all these reporters were after was just a ‘‘good story’’ — none of them had treated him like a human being.

Reporters, particularly those covering big events, are renowned for their competitiveness. But this essentially positive professional trait should never come at the expense of basic human decency.

When disasters strike in any community — particularly a small one unused to intense media scrutiny — professional behaviour by all media is paramount to ensure all reporters are not tarred by the unethical behaviour of the few.

During the Black Saturday fires, a televison reporter was arrested while filming in a restricted area where police were still looking for bodies. This angered residents, but also other media, as it meant police were unduly restrictive with other media entering the mountain village once it was reopened.

When 29 miners died in the Pike River mine gas blast on the west coast of New Zealand’s south island, police and mine officials were horrified at questions from two Australian reporters critical of rescue efforts, with one comparing rescue efforts to those during the September 11 terrorist attacks.

It is no wonder that the people of small town of Greymouth, already under huge strain from a contingent of international press, became even more suspicious of journalists after this incident.

During the coverage of the earthquake in Christchurch, New Zealand, which claimed 182 lives — around 20 of them Japanese students — a Japanese reporter was arrested while trying to enter Christchurch Hospital dressed in a nurse’s uniform, while a Japanese cameraman was kicked out of the destroyed city centre after becoming aggressive towards a police commander.

Beyond the grief reporters are inevitably exposed to during disasters, those of us who covered the Christchurch earthquake found the physical conditions hard enough — there was no water, patchy electricity, many police roadblocks, countless aftershocks and buildings literally crumbling around us. The behaviour of these reporters made local residents reluctant to talk to media.

In the case of this reporter, a lawful request to a hospital public relations representative to interview a patient who survived the quake — after his family had already given permission — was denied in the wake of the ‘‘Japanese nurse’’ scandal.

Had none of these incidents happened, ethical reporters covering these devastating events would have been able to continue doing their job, guided by decency and common sense.
Instead, nerves of interview subjects, already tested by the horror around them and rolling media coverage of their misery, were stretched to the limit and sometimes made them hostile towards media who had done nothing wrong.

Media behaving badly, or over-zealously, in disaster zones have often been labelled ‘‘vultures’’. Despite the regrettable actions of the few, media have a legitimate role to play when disaster strikes. Apart from informing the public about the event, their job sometimes extends to other forms of community service.

There is no doubt that up-to-the-minute reporting about conditions in the tiniest hamlets by the local radio services of the Australian Broadcasting Corporation helped save lives during the Black Saturday fires, and this year’s deadly floods and Cyclone Yasi in the state of Queensland.

Many survivors who later spoke to the media in evacuation shelters told of how constant radio updates were their only sources of information about local developments and guided their decisions of when to flee.

Media reports about disasters can also bring positive change to communities. Contacts made during the initial days of the Black Saturday tragedy informed The Age the government had stopped food aid to a remote mountain town cut off from the rest of the world a month after the fire. A day after the scandal was exposed on the newspaper’s front page, the food service was restored.

A reader who read a story about a family who lost their house on Black Saturday sent a caravan to them to live in after the fires.

Several Australian friends raised money through Facebook for a food relief effort for residents of Christchurch suburbs where there was no food, water, or electricity after reading about their plight on a newspaper website.

On a larger scale, media scrutiny of disaster prevention and recovery efforts puts governments on notice and ensures a greater common good. As evidenced by the Royal Commission into the Black Saturday bushfires, many shortcomings by public authorities — which the commission was ultimately critical of — were first revealed in the media. One example is a newspaper report that on the day Victoria burned, the then police chief— and later fire reconstruction chief — was at the hairdresser’s and dined at a restaurant.

Respect and the unwritten word

Traumatic events test everyone’s patience. Yet patience and a willingness to listen are a reporter’s best friends in these situations. Having covered major disasters in Australia and New Zealand over the past decade, I can honestly say that this common-sense approach has led to some of the most memorable publications in my career.

The ‘‘good’’ stories also often come unexpectedly and most often when you are just going down the street to talk to as many people as you can.

While some of what journalists hear in these situations may blip on their radar as a ‘‘good story’’, it is imperative to be respectful in the way we report on people’s tragedy.

A simple ‘‘how are you?’’ to a distressed person often leads to a torrent of emotion and graphic descriptions of that which happened to them or around them.

The public will never know some of what Mark and countless other firefighters, flood victims, grieving families, police and ambulance workers shared with my colleagues during years of reporting on traumatic events. Some details are too graphic, divulged under extreme stress, add nothing to already powerful stories and reporters sometimes need to self-censor to protect those they report on.

As well, with or without police requests, international media who reported on the Christchurch earthquake never told the world the full extent of what they saw while rescue crews worked on fallen buildings that had entombed dozens of people or while flying over the devastated city in an Army helicopter. Again, it would have added nothing to already powerful coverage and only distressed grieving families even further.

Our starting point should always be to treat victims and survivors with dignity and respect — the way we would want to be treated in a similar situation.

By backing off when people ask us to, talking to people ‘‘in their language’’ and following directions of authorities in disaster zones, reporters are also treated with respect. That respect leads to people trusting strangers with notepads to tell their deeply personal stories to the world.

Being exposed to trauma, particularly natural disasters with many deaths and visible physical devastation, is taxing for journalists, as well as local residents.

It almost never happens in real life, but reporters are always advised to stay off ‘self-medication’ (alcohol) and instead drink plenty of water and ensure they eat regularly to keep up their energy while covering physically exhausting events.

And while it may seem that a reporter’s own sadness about what they are seeing is negligible compared to the devastation of those they are reporting on, it is important to address these feelings, too.

Talking to experienced colleagues you trust, taking time off and allowing yourself to cry often make the difference between closure and long-term trauma. By sharing traumatic experiences with others, we ensure that our health, and the quality of our work, does not suffer.