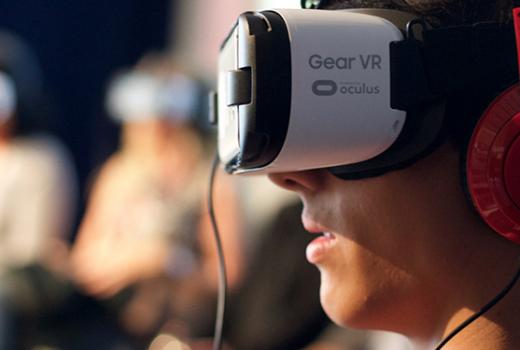 An interview with a German 360°-video-journalist.

People are so much more emotional when they see feature stories using their headsets and watching a 360° video than any other way of storytelling, because they have a feeling of really being part of the story, says Susanne Dickel, German video journalist.

She is the co-founder and journalist of IntoVR, one-year-old German start-up production company. A small team of journalists are producing mostly feature stories in the format of 360° videos.

In an interview with Mediacentar Sarajevo, Susanne Dickel talked about technical details of shooting with the 360° cameras, what drives her and her colleagues to move their journalistic forms and keep track with the technology, about the future in journalism, but also about the very essence of this profession. 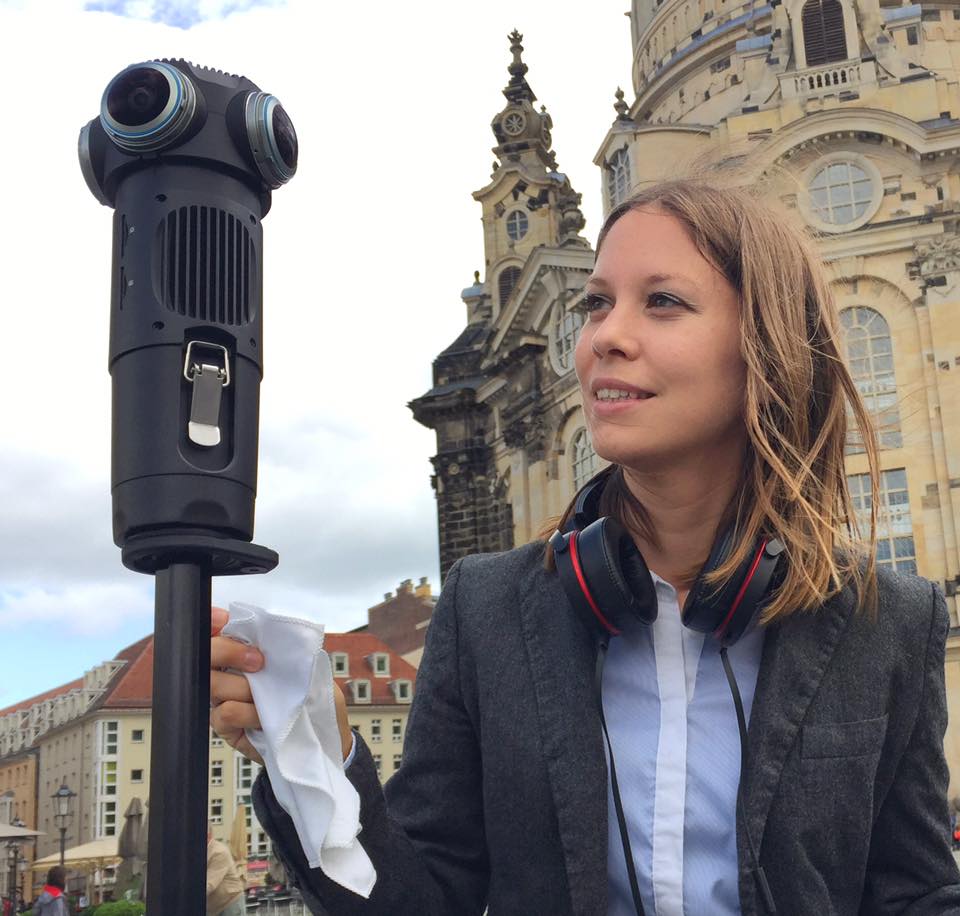 First you were a journalist who was mostly writing, then you started video recording, now you are doing all of that. What are the differences in storytelling, aside of the technical part, with the 360° camera?

Of course, there's already a difference in what story I can tell, what kind of story. You cannot do any subject with video. There are subjects that are really made for being told in print or in video because in video it's always the best to show that people are doing – something to accompany people who are doing something with a camera, whereas it’s easier to tell a deep kind of analysis with lots of facts and figures in print. Of course, if you want, you can do that. But I personally prefer doing reports to accompany people in video because I think that's what video is made for.

What kind of stories do you pick for IntoVR?

For IntoVR there is another thing I have to take into account, and that's location. In 360° video, the room, the space around the camera is important. Actually, you are not thinking in scenes like you do when you create a normal video, you have to think in rooms, in space, in locations. So, something that would be interesting in normal video, might be difficult to tell in 360° video. For example, at the beginning when I started to create 360° videos, I did a story about cross-golf (you don’t do that on a normal terrain, you go to ruins for example). I wanted to tell a story about lost places actually, and I was like: ‘OK, what can I do to bring life into those lost places’, because I didn’t want to take just 360° pictures, I wanted to have 360° video and there should be something moving. Then I saw cross-golf can be interesting, in combination with lost places, so I found a group of cross-golfers who went with me in ruins in Leipzig, and it was really cool. The lost places looked really cool and they were doing the usual, having fun and everything was cool until I watched the video and realised this golf ball is just tiny, you just cannot see it, and you have no option. In normal video, you can do a detailed shot of the golfer hitting the ball and everything would be fine and you cannot do that with 360° videos. That's something you have to consider when you think about the subject.

Aside from the space, what else do you need to think about that you wouldn't normally think about in a story?

It’s difficult to do cuttings, to cut the scenes. First of all, the scenes must be longer. Usually, in a video you have cuttings every few seconds, maybe even every second is tolerated, but in 360° video, one scene should last 10, 15, maybe 20 seconds, or even longer. That makes it pretty difficult because if you do the scene too short people would have the feeling they missed something, if they are not able to look around, you need to tell a story pretty slow. In 360° video, the story takes time.

Since it is not wide spread in journalism, many people understand the 360° video and VR to be related to video games or something fun and you are doing pretty tough topics, really serious stories. What are some of those serious stories you did?

First of all, you can do easy stuff like travel documentaries. But since we all have journalistic background and are more into the tough stories in our team, we mostly try to do something like that. There have been several tough stories, for example, a colleague of mine, last year she went to Iraq to the Kurdish part, and she accompanied some soldiers who were hunting fighters from ISIS and she talked as well with women who fled from ISIS and who were living in a refugee camp in northern Iraq. Another story was different because it was recreated with actors, in which case the user is not just a viewer but is a part of the story. Although it's still a 360° video and you cannot exactly interact, in real virtual reality you would be able for example to touch something or interact somehow, answer maybe, and that was not possible. But the actors talked to you and the subjects were a prisoner at the Stasi prison in Berlin in Hohenschönhausen, and we had everything really close to historic, like what the witnesses who were there what they remembered and we did a lot of research to get everything as accurate as possible. We created a story board real neatly and we were thinking about everything. When you are doing a 360 video, you cannot answer, and we chose to have the story according to the remembrance of a poet. We were doing this story for the former Stasi prison which is now a memorial museum.

Who are your clients mostly? How much are you “wanted”?

We are focusing on journalistic video, for example we are working quite a lot with Ringier in Switzerland, we produce videos for German public TV, for their website, and other media companies in Germany, but now there are a couple of things we are working on with German public television.

You can live on selling your products?

Yes, as a company we can survive out of that but I have to say that many of us are working as freelancers. Of course, right now we are dependent on working with freelancers. You have to sell the story and live of that, and right now we don’t want to have the risk to hire a lot of people and tell them in three months that we cannot afford to pay them anymore.

I can assume you are optimistic about this type of filming, that this is going to grow, but what is realistic?

Actually, right now, and you will hear that a lot, that the VR bubble is kind of bursting. You always have that when you have a new invention. It starts and everything is ‘OMG, that is the next big thing’ and everyone has huge expectations and of course usually it’s just not possible to meet these expectations for every company, for every start-up. But we think that we have a good solution because we didn’t spend a lot of money from an investor, we are trying not to have extensive costs, we try not to do those kind of unicorn productions which are really expensive. Media companies pay for that once and they cannot afford that more often. That’s not what we want to do, we offer prices that make it possible to buy that more often. For some 360° videos, you see in the end how many people are working on it, and it’s a lot. And we don’t need a whole bunch of people, you can do that as we do, so-called VR-j, you can do that with two people or even by yourself.

So, you are all multi- skilled?

People we are working with are usually VJs, so they know about how to tell the story and they know about filming. Still, of course you have to, as we say, unlearn a lot of things, because 360° video is still quite different to shoot and to do from normal video but of course it’s helpful if they already know how to use an audio recorder and how to edit a video because we are doing all that by ourselves, one person has to do shootings, has to research, has to edit. 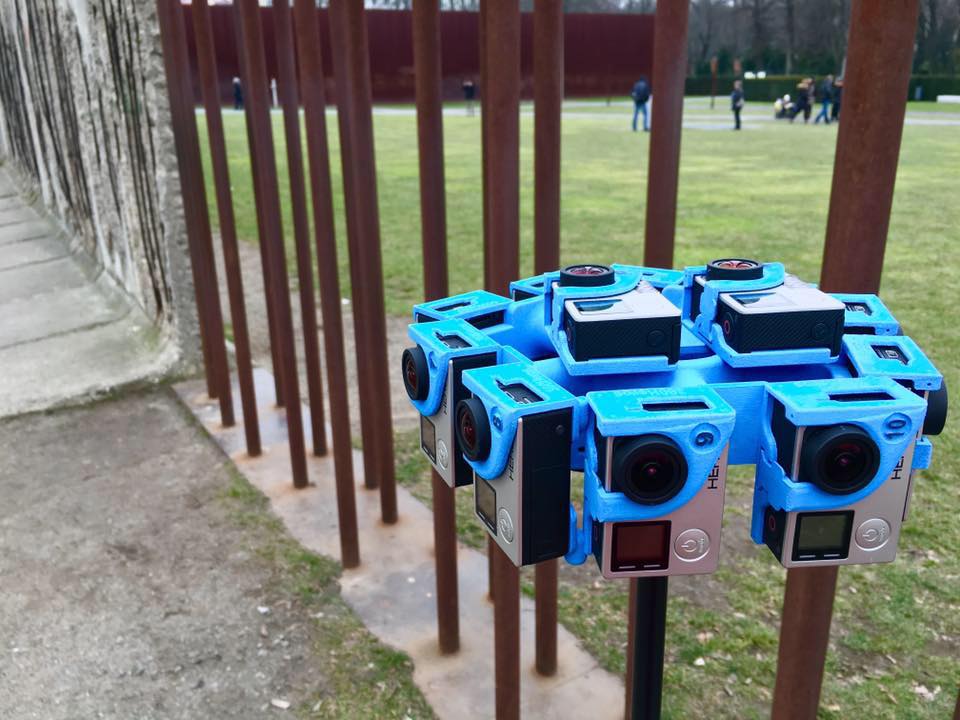 How does that process of work look like technically?

First thing is that you think about the location, where you can shoot and of course people, whom you can talk to. The best would be if you can in advance see some pictures so you can think about where would be the best place to set up the camera. Then you have to decide what camera equipment might be the best. For example, if you are shooting in a narrow location like in a prison you always should shoot with a back-to-back camera, whereas where you have broad locations, where there is a landscape it’s better to have a camera like we’re using, as well a ball with six go-pros. That’s something you have to decide. Well, then you go there, shoot, and you always have to think of lots of location. As I said, it’s difficult to do a cut, and when you do a cut, actually you have to move to another location because it has to look different from the previous location, otherwise you wouldn’t actually have a cut. So, when you think you have enough locations, you probably need to go to shoot ten more.

When you record, you have to hide from the camera?

Yes, some people say ‘when you do a normal video or as well photographs, you’re hunting, when you’re doing 360° video you’re setting bat traps’ because you set up the camera and go run away and hide somewhere. You as a journalist don’t want to be a part of the story. Of course you can make the decision that you are part of the story as a reporter, but usually we don’t want to destroy this feeling of immersion of being part of the story by having a reporter in the scene.

No. As it records everything, you’re always in the scene. You have to hide and that’s up until today difficult for me because I don’t always feel good about leaving the camera all by itself. It’s always difficult, because you cannot really see what is it recording. There are cameras that give you a live video or you could synchronize at least one camera with your mobile phone and see how the image looks like, but in the end, you need to stich the material and then you know whether it worked out or not. 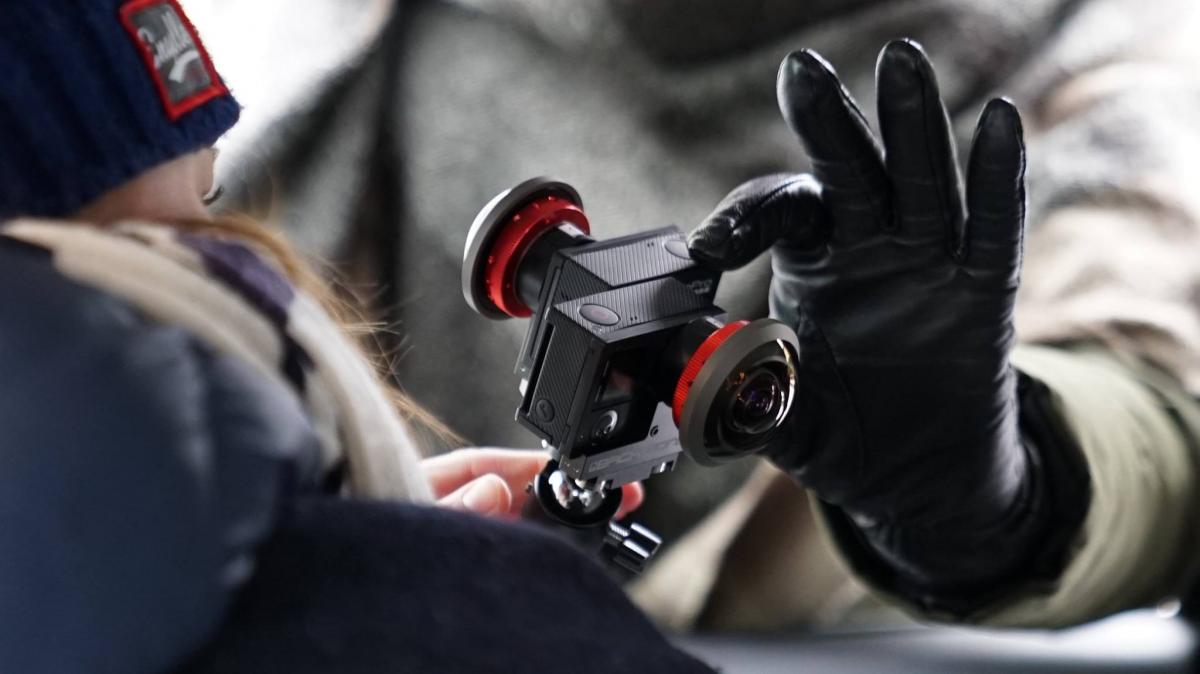 Is there something new you are already thinking about? What is the next thing?

One thing is that we want to do more stories like the one from the Stasi museum where the user is not just a passive viewer, where people are really talking to you and where you have some kind of role and where you are really asked to think about what your position was and what would you answer if you could’ve answered. By this, the immersion is bigger and impact is greater than just being a passive viewer, but that’s difficult and you really have to write a kind of story lines and it’s really different from how you would think as a journalist. Usually journalists are not trained, or they try to show different perspectives, but they’re not usually forcing their users to take a position. Another thing which is more into the future, which I think is interesting is Augmented Reality but that’s really for me, something that I now just think it’s interesting and I want to be part of that, but I have no experience so far.