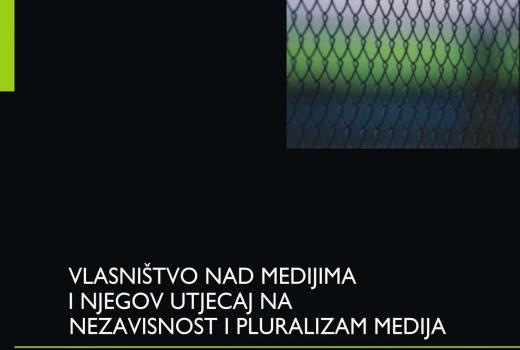 This publication aims to map out ownership relations and their impact on pluralism and independence of the media in BiH, to enable a better understanding of BiH context in the light of regional trends through a general review of the situation in this field in the countries of the South East Europe and the EU countries from Central and Eastern Europe.

The publication also includes two, out of 19 reports, from different countries that have come out from the project South East European Network for Professionalization of the Media (SEENPM) – report for Bosnia and Herzegovina and regional review. All the reports have been published in Media Ownership and its Impact on Media Independence and Pluralism.

The publication provides a special review of regulatory frameworks and mechanisms, privatization, basic models of media ownership and its impact on media pluralism and independence. In this publication, privatisation of media has analysed through examples of transitional post-communist societies, looking back in particular to the Czech Republic, Estonia, Lithuania, Latvia, Hungary, Poland, Slovakia, Albania, BiH and Croatia. Similar analysis has been done for the media market, parallel markets (divided by language and ethnic lines), and through examples of media independence, corruption, ethics and investigative reporting.

The publication presents an analysis of media ownership, and of media concentration resulting from it, which, as such, is not an excusive phenomenon of modern societies. One of its most recent features is almost ·incestuous relation between the politics and media’. Close relations between media, political and economic capital (that is occasionally in the hands of a single person) is a common thing in the EU countries, as well as in 18 countries covered by this study. The publication offers a review of the 'media transition’, media privatisation methods, legal framework, current situation on the media market, the biggest media owners in these countries and their official and unofficial political connections.

Measures suggested in the publication, which may be used in the approach to the problem of media concentration and its impact on media pluralism and independence are the following: legal regulation of media concentration, transparency of data on media ownership, active intervention by the state with the aim of ensuring media pluralism, support to public broadcast service providers, independent sources of data on circulation, audience, readers, viewers and listeners, etc.

Report for Bosnia and Herzegovina

In addition to the regional review of media ownership in South East European countries, and the EU member countries from Central and Eastern Europe, the publication also contains a report for BiH, where at this moment there are no cases of media concentration that would represent a potential threat to fair and transparent market competition. However, uncertainty still dominates the media scene. This uncertainty is a result of the idiosyncrasies of BiH context, which include the complex state structure, overburdened media market, weak legislative regulation and self-regulating mechanisms, as well as the institutional framework of the media scene, non-transparency of company ownerships in general, etc.

BiH media market is characterised by an almost complete lack of any significant media concentration in cases of multiple and mixed ownership. BiH stands in a good position when it comes to the issue of media freedom. In the report of the Reporters Without Borders for 2003, BiH was ranked on the 37th place in the world, before Spain and Italy, and far higher when compared to its neighbours from the region, Croatia, SCG, Macedonia. The publication gives a review of development of radio and TV sector in BiH through indications such as the number of broadcasters, viewership, etc. The reader will also get a review of the TV sector development over the last couple of years. There is also available a similar review of the print media establishment and development.

Since media markets in these countries are very dynamic, with ownership structure, large number of media and media laws changing daily, some data are inevitably outdated at the time of issuing this publication.  However, all this has no significant impact on models by which media markets function, behaviour of regulators and media owners, or their influence on media pluralism and independence as described in these reports.

The publication project was implemented with the support of the Open Society Institute Network Media Programme, The Guardian Foundation and the Danish government programme Fresta. The project was implemented in partnership with media centres and institutes – members of the South East European Network for Professionalization of the Media, university departments, and national OSI foundations in the countries that participated in the review.