Journalistic ethics are being forgotten in order to get more clicks 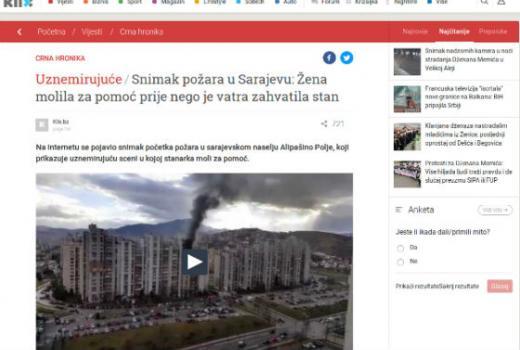 Journalistic ethics are being forgotten in order to get more clicks

Media outlets publishing video footage of a woman burning in the flames of a Sarajevo fire is the latest example of broken principles.

A question that journalists ask themselves is whether they should publish something or not: Is the news, footage or photo of public interest or not? At least, it should be like that if we were directing that question toward ourselves as often as we think we are.

After that, we should ask ourselves a second question: Are we putting someone in danger by posting that footage or photo? When I say ‘putting in danger,’ I mean in any way possible; even emotionally, which is something that we tend to forget about.
Unfortunately, many journalists rarely ask these questions — or don’t ever ask them at all.
Another piece of footage has caused a stir in Bosnia and Herzegovina on social networks recently. It is a video in which a desperate woman pleads for help before being swallowed by flames caused by an explosion of a gas tank in her apartment on the 11th floor of a Sarajevo highrise. This footage wasn’t made by a journalist or cameraperson who had been sent by an editor to do a task; even if this was the case, it should be up for discussion. It was all filmed by a tourist’s mobile phone, and published by Klix.ba — and later by Avaz, Buka, Fokus, Blic, Tuzlanski, 24sata.info, Ekskluziva, and many others — three days after two old people died in the accident.
I have thought about what could possibly be the public interest of publishing such footage, which is ethically questionable and completely unnecessary in a situation in which we already knew everything there was to know about the fire — what doesn’t function properly, and who is in charge of what and who is responsible. I say ‘knew’ — that is, all of us who wanted to read about it. Also, I believe we already knew all of that before two old and helpless people died in those flames, but we just didn’t care whether hydrants in buildings were functioning or why Sarajevo’s firefighters didn’t have the money or means to do their jobs without obstacles.
I don’t want to believe that such footage can overthrow a government, fix hydrants, teach a lesson to those responsible (who are guilty), employ more firefighters or secure normal working conditions. I know for a fact that such footage cannot make us think about how we can change the fact that we have water shortages, and even when there is water — it’s dirty and untreated.
This footage will not change the fact that firefighters use fildzans (cups used for drinking coffee in some Balkan countries), and that politicians drive cars worth 250,000 marks and have villas and apartments. Why then is this footage of interest to the public?
Maybe some people haven’t read it, so let us repeat Article 9 of Bosnia and Herzegovina’s Code of the Press and the Online Media, which refers to privacy:
“The press shall avoid intrusions and enquiries into an individual’s private life, unless such intrusions or enquiries are necessary due to the public interest. The treatment of stories involving personal tragedy shall be handled sensitively, and the individuals affected shall be approached with sympathy and discretion.”
When speaking about public interest, I can’t see a single fact that would convince me that to publish that footage on Klix — which is intrusive into someone’s personal life — is of interest to the public. Similarly, there was the case of the murder of two soldiers in Rajlovac, when footage was broadcasted on TV of one of the killed soldier’s family members who had just found out that he had been killed, or when journalists, soon after the tragedy, asked the family to tell them how they felt after their son was killed.
What could possibly be the public interest in that? Is there anybody who thinks that the number of potential terrorists will decrease if we hear what crying parents have to say about their dead child?
This isn’t the entire point — where did compassion for those tragically killed go? The compassion defined by the press code. Where is the compassion for their children, who are made to watch their mother swallowed by a ravaging fire, while the immobile father is lying inside? Should we be the ones to graphically remind them?
I believe that by not publishing this footage it would significantly change a lot about the journalistic profession. It would mean we aren’t just working for the clicks, but for the public interest mentioned at the beginning of this piece. Clicks and sensationalism are slowly but surely destroying our profession.
In the race to be fast and sensational, and all to get a higher number of clicks than other online media, we have lost responsibility for what is said, written, or recorded. We have become distrustful, illiterate, with a bunch of factual and spelling mistakes.
We have forgotten about being human first, and then journalists, which is why people will trust us less and less every time. How can we expect them to, when we are capable of putting someone’s misfortune, death, suffering, and misery on the front page?
Somebody will say — and they will be right — that people read and watch precisely those topics where journalists should be the most careful. But, does this mean that we have to indulge our audience this much, and to poison them with titles such as “You won’t believe what happened next” or maybe, “Look at how this woman burned.” To do all this just to get somebody to click on your text.
I often think about how we are turning into people who work for clicks. Perhaps somebody will think of a name for that job. I have no idea how it should sound, but if we keep up like this, soon nobody could call us journalists any longer.
Translation: Kosovo 2.0