Instead of transparency and openness - an ever-deepening secrecy 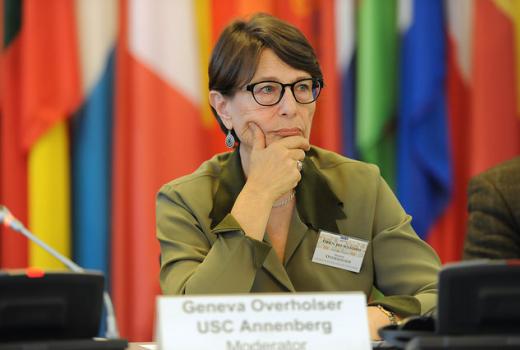 Instead of transparency and openness - an ever-deepening secrecy

The United States prides itself on the powerful First Amendment protection of freedom of expression and on a long tradition of a vigorous and free press. But that doesn’t mean there aren’t plenty of threats to the free flow of information in this powerful nation these days.

Barack Obama began his presidency with a pledge to increase openness and transparency, yet it quickly became apparent that his time in office would be instead a period of substantial regression for freedom of information.  Strikingly, 2013 was the first time that the U.S.-based Committee to Protect Journalists, which has examined press freedom in countries around the world since the early 1980s, focused on its own home turf. 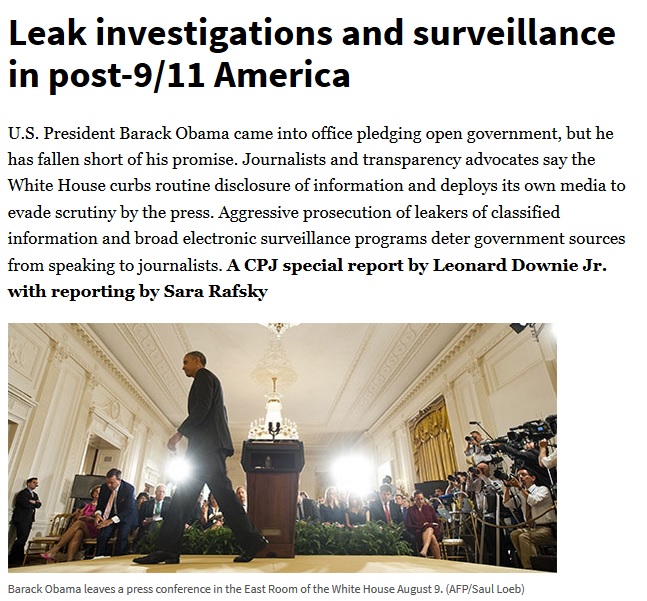 As the CPJ report’s principal author, Leonard Downie, Jr., former executive editor of the Washington Post, said at a press conference, “The Obama administration’s aggressive war on leaks and its determined efforts to control information that the news media needs to hold the government accountable for its actions are without equal since the Nixon administration.”
In an equally damning indictment of Obama, Katherine Meyer, a Washington lawyer long active in Freedom of Information issues, had this to say: “Obama is the sixth administration that’s been in office since I’ve been doing Freedom of Information Act work. … It’s kind of shocking to me to say this, but of the six, this administration is the worst on FOIA issues. The worst. There’s just no question about it. This administration is raising one barrier after another. … It’s gotten to the point where I’m stunned — I’m really stunned.”
Far from the transparency and openness Obama promised, reporters assert, Washington has retrenched into an ever-deepening secrecy. “When it comes to implementation of Obama’s wonderful transparency policy goals, especially FOIA policy in particular, there has been far more ‘talk the talk’ rather than ‘walk the walk,’ ” said Daniel Metcalfe, director of the Department of Justice’s office monitoring the government’s compliance with FOIA requests from 1981 to 2007.
In an especially striking assessment of the overall condition of press freedom in the United States, Reporters without Borders placed the U.S. at Number 46 in its 2014 Freedom index.
That report had this to say about the United States:
“INFORMATION SACRIFICED TO NATIONAL SECURITY AND SURVEILLANCE
“Countries that pride themselves on being democracies and respecting the rule of law have not set an example, far from it. Freedom of information is too often sacrificed to an overly broad and abusive interpretation of national security needs, marking a disturbing retreat from democratic practices. Investigative journalism often suffers as a result.
“This has been the case in the United States (46th), which fell 13 places, one of the most significant declines, amid increased efforts to track down whistleblowers and the sources of leaks. The trial and conviction of Private Bradley Manning and the pursuit of NSA analyst Edward Snowden were warnings to all those thinking of assisting in the disclosure of sensitive information that would clearly be in the public interest.
“U.S. journalists were stunned by the Department of Justice’s seizure of Associated Press phone records without warning in order to identify the source of a CIA leak. It served as a reminder of the urgent need for a ‘shield law’ to protect the confidentiality of journalists’ sources at the federal level. The revival of the legislative process is little consolation for James Risen of The New York Times, who is subject to a court order to testify against a former CIA employee accused of leaking classified information. And less still for Barrett Brown, a young freelance journalist facing 105 years in prison in connection with the posting of information that hackers obtained from Statfor, a private intelligence company with close ties to the federal government.”
An emphasis on national security, particularly in the wake of the 9/11 attacks in New York and Washington, D.C., does indeed seem to lie at the root of much of the Obama administration retrenchment. As an Associated Press story noted, “In a year of intense public interest over the National Security Agency's surveillance programs, the government cited national security to withhold information a record 8,496 times — a 57 percent increase over a year earlier and more than double Obama's first year, when it cited that reason 3,658 times. The Defense Department, including the NSA, and the CIA accounted for nearly all those.” 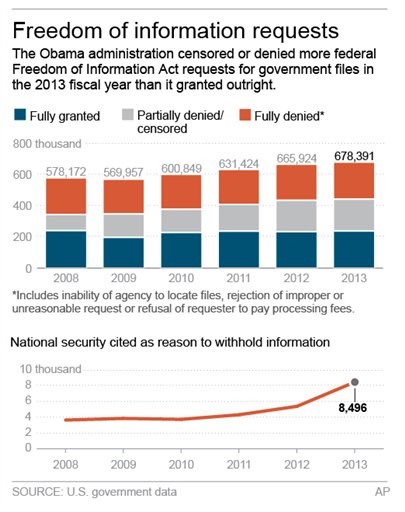 Privacy concerns are another driver for the slippage in freedom of information, as I noted in a column for the Online Journalism Review. Newspapers that published public records indicating which citizens held gun permits were besieged by citizens outraged by what they saw as an invasion of privacy. (Some of that outrage was no doubt fueled by organizations such as the National Rifle Association.) And those same citizens praised the craven public officials who responded by removing such information – deemed public by law – from the public records in their local municipalities.
The American public, while broadly supportive of press freedom, has never had a particular relish for the actual specifics of the fight to keep that freedom alive. And now, a weakened media finds it hard to fight that fight, as well. As their traditional primary revenue stream, advertising, diminishes, and competition proliferates, the institutions that once fought the FOI fight have fewer resources to do so today.  When I first went to work for the Des Moines Register – the leading newspaper in the state of Iowa -- in 1981, the newspaper had its own in-house law firm with three attorneys devoted entirely to freedom of information issues.  They were in regular conversation with editors and reporters in our newsroom so as to ensure that our reporting was both as reliable and as vigorous as it could be.  But they also fought the FOI fight, pro bono, across the state.  This was a fairly common practice nationwide, with major news institutions pressing for openness and transparency, filing FOIA requests, and taking government entities to court when they failed to observe the open meetings or open records laws.
With many of those news organizations now weakened, there remain state FOI councils, as well as national nonprofits that continue the fight, including longtime stalwarts like CPJ, the Reporters Committee for Freedom of the Press, and the Student Press Law Center, and newer ones like the Sunlight Foundation. 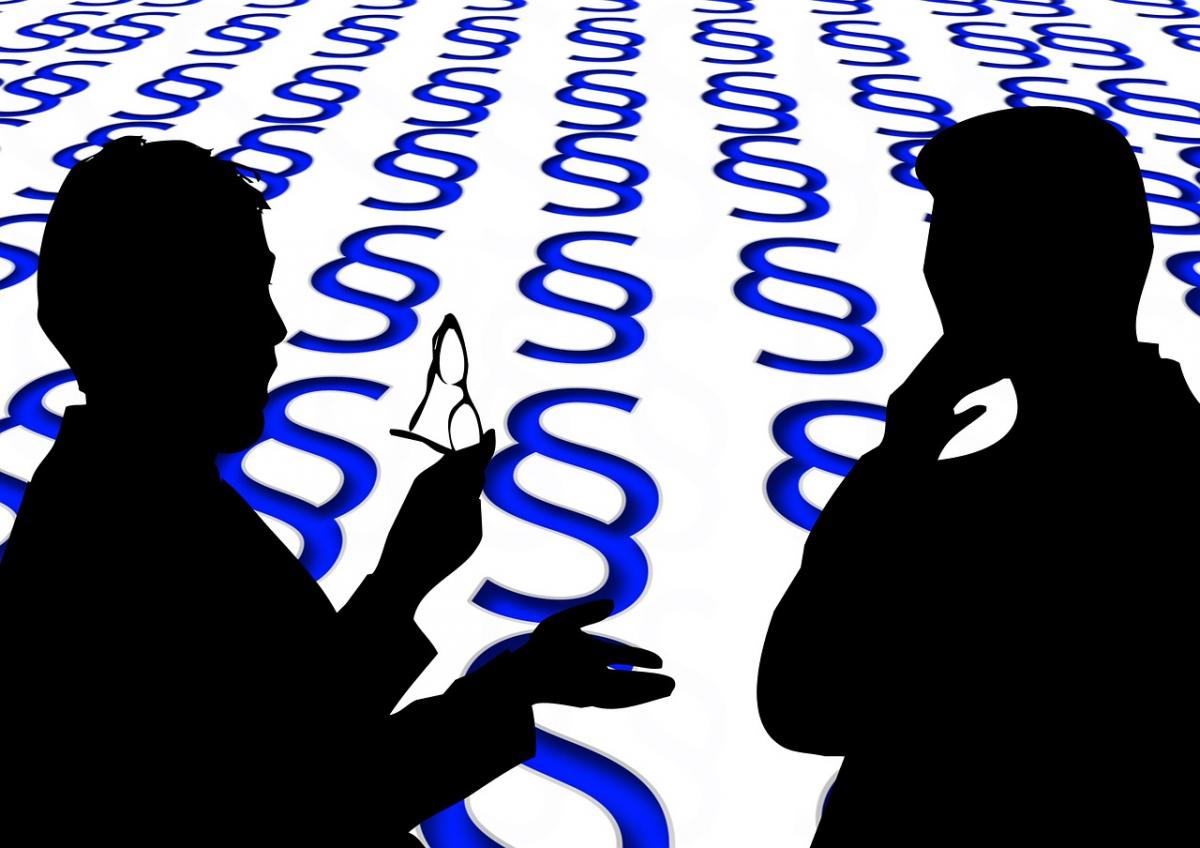 The seduction of secrecy however, has a powerful pull. As the late Senator Patrick Moynihan wrote in his fine book, “Secrecy,” “A case can be made . . . that secrecy is for losers. For people who don't realize how important information really is. The Soviet Union realized this too late. Openness is now a singular, and singularly American, advantage. We put it in peril by poking along in a mode of an age now past. It is time to dismantle government secrecy, this most pervasive of Cold War-era regulations. It is time to begin building the supports for the era of openness that is already upon us.”
Far from a building of that support, freedom of information in the United States has instead fallen backward.  As the Obama retrenchment has shown, sound laws and a solid legacy do not alone guarantee the continued health of freedom of information.  Vigilance is essential. These recommendations from CPJ in a letter to the White House offer a more promising path:
• “Affirm and guarantee that journalists will not be at legal risk or prosecuted for receiving confidential and/or classified information.
• “Be more forthcoming about the scope and nature of the National Security Agency and other surveillance activities as they are being applied to domestic and international journalists. Develop policies to limit surveillance of journalists’ communications to ensure the integrity of a journalist’s right to protect his or her sources.
• “Implement revised Justice Department guidelines and prevent the filing of unnecessary, overly broad, and/or secret subpoenas to obtain journalists’ records.
• “End the practice of bringing espionage charges against people who leak classified information to journalists, which could create a severe chilling effect and thwart the free flow of information on matters of public interest.
• “Make good on promises to increase transparency of government activities and end government intimidation of officials who might speak to the press. Enforce prompt and less restrictive responses to FOIA requests and more systematic and far-reaching efforts to reduce over-classification. Encourage administration officials to be open and responsive to press inquiries.
• “Advocate for the broadest possible definition of ‘journalist’ or ‘journalism’ in any federal shield law. Any federal shield law should protect the newsgathering process, rather than professional credentials, experience, or status, so that it cannot be used as a means of de facto government licensing.”
This article has been published as part of the Public Data Now project, supported by the The Royal Netherlands Embassy in Bosnia and Herzegovina.