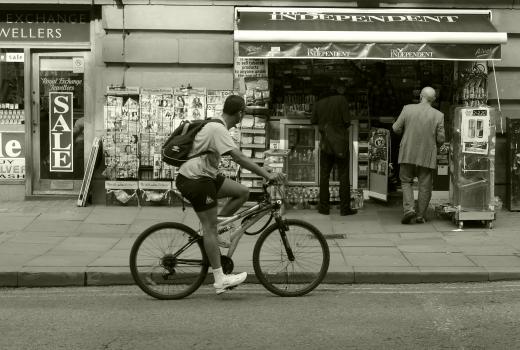 The Independent was a pioneer in the British media – but it has fallen victim to the forces closing in on newspapers everywhere.

When the BBC announced the likely death of the Independent newspaper - at least in print form - on Thursday morning, it spent all of ten seconds on the subject. The brevity of that announcement spoke volumes for the reduced clout of a newspaper that once was a power in the media – and in the land.

In truth, while the bells for the Independent are tolling, the patient is still breathing – just. But not for much longer. The paper’s Russian owners, the Lebedev family, confirmed on Friday that after selling off its only profitable arm, the tabloid “i”, the last copy of the Independent will be printed on March 26.

The Independent’s rise and fall is much more than the saga of one newspaper. It echoes and symbolises the decline of the print media in the West generally, all of which are struggling to find a business model on which they can survive in an altered world.

The newspaper was born at a significant moment in Britain. In 1987, just after the launch, Conservative leader Margaret Thatcher won her third general election in a row, ending the argument over whether Britain would be run according to her own capitalist ideas or the Socialist model proposed by the Labour Party and its trade union allies.

In a sense, the paper was a child of Thatcher’s revolution, which saw the power of the print unions to dictate working conditions shattered.

The paper’s founders seized the moment to start a new outlet, at the same time spotting a niche among readers who were weary of the left-right battles of the grand old newspapers.

Before the Independent came along, Britons wanting a serious morning read effectively had a choice of four, the Financial Times, Times, Guardian and Telegraph.

While the “FT” catered to the business community and the Times spoke for officialdom, the other two operated as in-house message boards for Labour and Conservative supporters respectively.

The Independent cornered a market among hundreds of thousands of people who did not see themselves in either camp.

At its height, the circulation topped 400,000 and the paper was breathing down the neck of the Guardian.

But the Independent was soon undermined by some of the very factors that helped raise it up.

As the outlook for print papers darkened in the 1990s, thanks to the rise of the Internet, they fell back on their politically committed core readers.

All big newspapers in the UK, as elsewhere in the West, have seen massive circulation falls in the last 20 years.

The Telegraph used to sell well over a million copies a day, the Times around 800,000 and the Guardian over half a million.

But while all of them have lost at least half their readers over the past decade or so, it is still hard to imagine a Britain in which neither committed leftists or Conservatives have a newspaper of their own.

The old papers also have the weight of tradition behind them. They date back decades or centuries – the Times all the way back to 1785, the Guardian to 1821.

The Guardian also sits on a wealthy trust fund, containing the legacies of generations of left-wingers who left it their money.

The Guardian may run up eye-watering losses of about 50 million pounds each year but, like a spendthrift aristocrat who has inherited a large fortune, it will be some time before the crunch comes.

The Independent has no ancient tradition or fixed political constituency to appeal to - and no trust fund, either. For years, its survival has been a miracle, depending on the largesse - and ambitions - of the Lebedevs and on constantly trimming and rejuvenating the workforce.

For those, like myself, who remember the very first day of the paper, it is all a shock.

Back in the day, the Independent’s Foreign “Desk” was not a desk but a large room full of trilling phones, people charging about, and divided into sections, East Europe, West Europe, Latin America, Africa…. Overflowing ashtrays and wine bottles at various stages of consumption lined the tables. It seems inconceivable now.

No one then had the faintest idea that the day would dawn, far sooner than anyone imagined, when not that many people would want “news” - least of all in the form of a “news paper”.

Now it seems like a distant dream. Enter a London café these days and you may still see a handful of newspapers stuck in the corner. But they are usually neatly folded and unread – more of a decoration than a necessity. Hardly anyone under the age of 40 reads them.

If they want news, they read it online on a laptop or iphone - and for free. Few, if any of them, will notice the disappearance of the print Independent – the online paper will still be around for a while.

For those of us in an older generation, especially those off us who once worked at the Independent, it is more traumatic – another sign that the age of newspapers - which began some 300 years ago - is passing into history.

This comment was originally published at Balkan Insight, where Marcus Tanner is the editor. It is re-published here with the permission of the author.