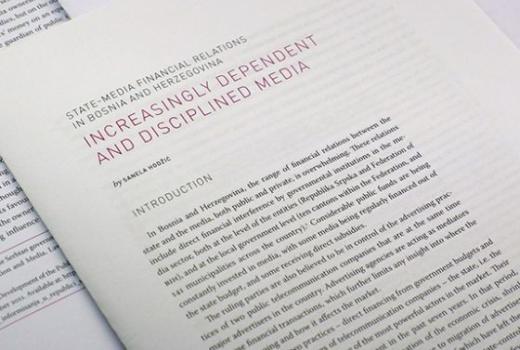 The report presents the review of financial relations between the media and the state in Bosnia and Herzegovina, including direct financing from government budgets and donations for media, advertising practices of ministries and public companies, as well as the way functioning of the institutions reflects on the sustainability of the public radio-television services.

The author concludes that the current practices create the impression that „political and business interests overwhelm any idea of public interest in financial relations between the authorities and the media“. Some of the emphasized problems include the lack of transparency of information on allocations for the media and transparency of procedures of allocation of money, questionable decisions on allocations, lack of guarantees of editorial independence and a failure to ensure the financial sustainability of the PBS. The report warns that throughout the existing arrangements of financing from the public sources it is not just that the public interest is not assured, but just the opposite – the media integrity and the editorial independence are seriously endangered.

Relying on some of the conclusions of the research and the recommendations offered at the end of the document, Mediacenter will in the following period, through a range of consultations and meetings, initiate a dialogue on the existing practices as well as the ways to encourage larger transparency of financing of media sector from the public budgets, and to establish a principle where the public financing of the media will inevitably be based on the criteria of public interest.

The report was published within the project SEE Media Observatory. The project is funded by The European Union Instrument for Pre-accession Assistance (IPA); Civil Society Facility (CSF).