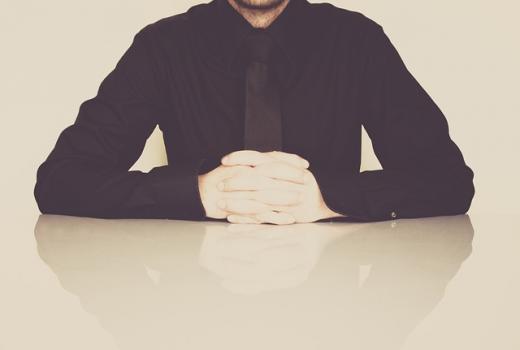 Those who run multimillion companies are sooner or later faced with a question whether to cross to the shadowy world of semi-legal practices and disappear from the public. Even if they do, there is always a way how to learn about their business using only openly accessible data.

Knowing how Petr Sisák’s face looks like is something that an ordinary reporter treasures as an elite privilege. This once convicted felon for his financial crimes during nineties is now back on the scene, presently involved in bankrupted companies that were invested into by three city districts of Czech Republic’s capital Prague.

In June 2012 a broker company Key Investment was declared insolvent. This company was responsible for investing city districts’ money into Sisák’s companies. After the public realized that the money was gone and the companies are dead as well, Sisák became a person of interest for most of the media outlets in Czech Republic.

Who is this man who managed to get away with so much money, vaporizing it into thin air? In Czech Center for Investigative Journalism we’ve decided to do Sisák’s profile. However, we wanted to see what we can learn about this secretive half felon half businessman only from openly accessible data. And we have found some very strong evidence pointing out his shady practices that traditional media were not able to get.

Man with a hidden face

Sisák does not really care for publicity, instead, he prefers to keep his face hidden. Trying to Google his image usually brings you only one his photo that was taken some time ago. This photo just keeps being reposted along with any articles that concern him. However, this time we were lucky. There was a new article published. It brought up new photos that one of Czech reporters was able to acquire from Sisák’s facebook profile. Along with the photos, there was also more important information – the alias he was using to act on social media: Oliver Cromwell.

So, we knew the guy was smart and that he was using a disguise technique we’ve been seeing for some time in Czech republic. Usually, this is applied to companies that need to keep a low profile or they want to be hard to find and confuse those searching for them. They pick a name of widely known person or place, so that searching for them generates a lot of non-relevant results. Searching for Oliver Cromwell would only get us to Wikipedia page of the famous politician.

Therefore, we’ve decided to inspect information available from his profile. There we have discovered that he is in contact with a woman named Lucie Sisáková. This could be his daughter or wife. Another thing that we have learned is that he was involved in Lanna Gym. It is a known fact that Sisák is a great fan of kickboxing and Muay -Thay. He is even so big fan that many members of supervisory boards of his companies are in fact his kickboxing friends. This photo shows Sisák partying with some of them. The important guy in the picture is called Jakub Malich.

For us, this was a very important discovery as Malich is a member of supervisory board of Borsay, one of the three companies that bankrupted along with Prague city hall’s money. You really cannot tell that from looking at the recent records in business register, as the current owner of Borsay is UK based company Birgo limited. However, you could find that Malich was a member of the supervisory board between 2012 and 2014 when you search in history records. Right now, we’ve had a proof that there was a personal connection from Sisák to Borsay.

Another important source of information we use in Czech center for investigative journalism are leaked document of offshore companies based in Panama, British Virgin Islands and similar destinations. We search for those records in two main hubs – Offshore leaks platform and Investigative Dashboard.

First, we go and check in Offshore leaks. The database contains ownership information about companies created in 10 offshore jurisdictions including the British Virgin Islands, the Cook Islands and Singapore. It covers nearly 30 years until 2010. One day, International Consortium of Investigative Journalists, or ICIJ in short, was so lucky to receive a hard drive from “Mr. X”, a guy who wants to remain in secret. On the harddrive, there were private business information regarding thousands of companies based in offshores. However questionable this act of “freedom of information over business secrecy” was, it gave journalists all over the world a big advantage for reporting about hidden offshore companies.

We used this opportunity and searched the database. We found Mr. Sisák to be the director and sole shareholder of Isaac Investment Group Ltd. (link file Petr Sisák - offshore leaks). As the site does not offer an option to view leaked document directly, we kindly asked the people in ICIJ to provide us with the documents they had in their possession and waited. 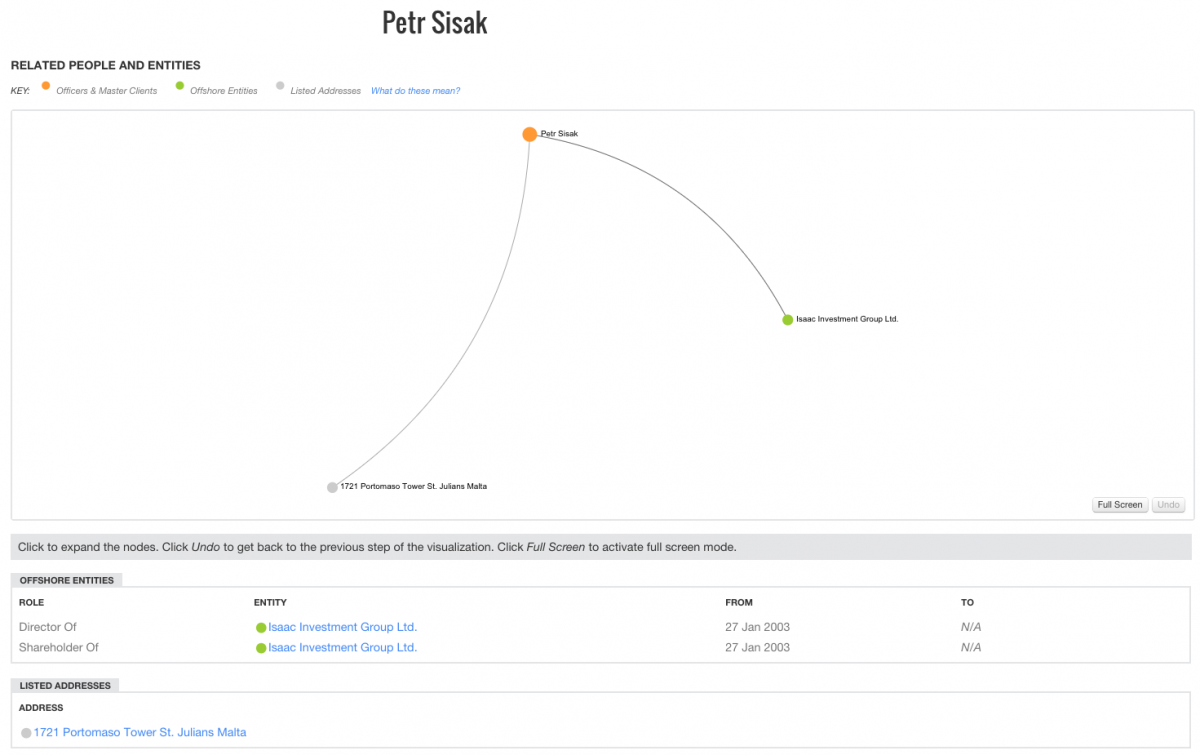 Meanwhile, we went to search for Sisák’s companies in Investigative Dashboard. This is another great tool for investigative journalists. Basically, the site has three layers that you can use to search for information. First, you can search the aggregated database of all previously searched information from many registries that OCCRP (Organized Crime and Corruption Reporting Project) has access to. Than, you can go directly into more than 300 international databases and search for information personally. The last option is to file a request for assisted research. Than you get in touch with Lejla or Miranda and they help you crawl through the databases and find what you are looking for.

When they got back to us from ICIJ and OCCRP, we received several files that regarded Sisák. The most interesting one was a sole share of an offshore company called Isaac Investment Group Ltd. based on British Virgin Islands (link file NYPROP-Sisak-BVI share certificate.pdf). This was a huge thing for our investigation into Sisák’s business as this company was involved in his big takeover of another company Euro Capital Aliance. As a member of the supervisory board of ECA, he persuaded other stakeholders to buy a debt of 9 million Euro from Isaac Investment Group Ltd. into the company. 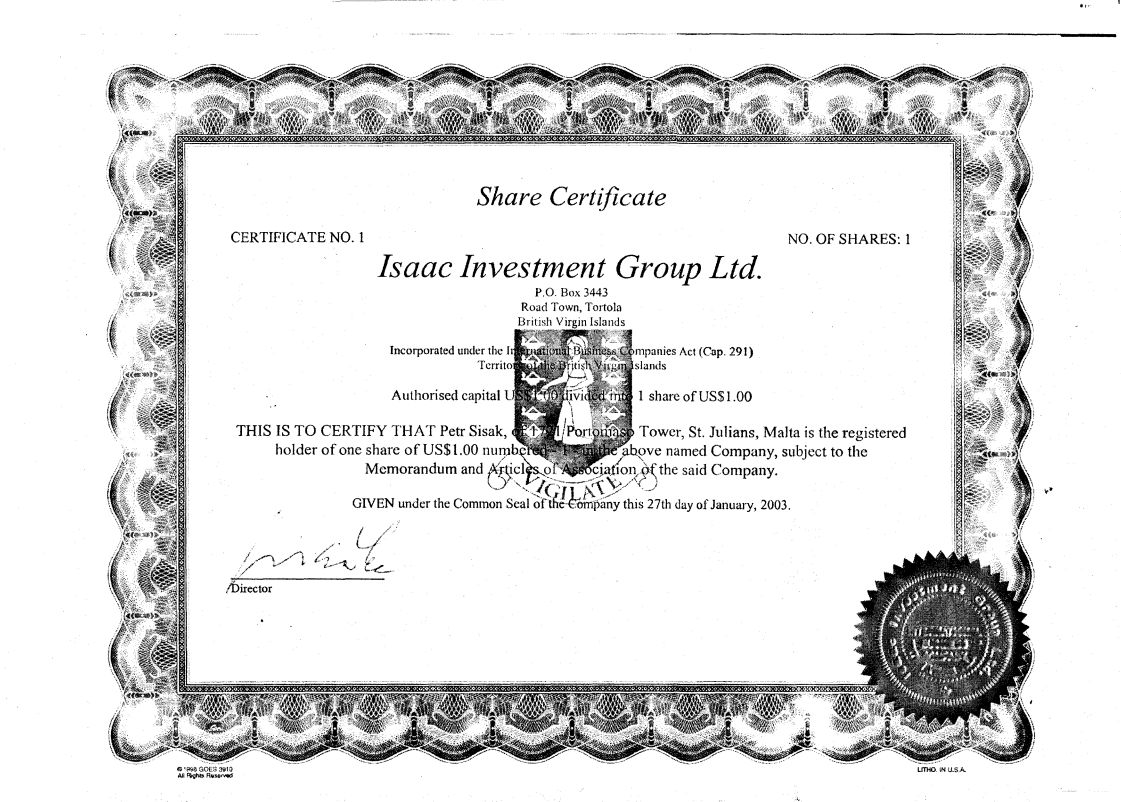 With this share confirming his ownership of Isaac Investment, we were able to reconstruct the story. Simply put, he created a debt with his offshore company than he later transferred into ECA to be capitalized, therefore increasing his share in the company.So he became the largest shareholder and acquired control of the company.

We knew that our investigation could go on for a long time. But we have decided that we were happy for a moment, published our findings and started preparing for another round of digging through the archives, searching for another story from Sisák’s past.

Petr Sisák, once already sentenced for financial crime, likes to keep his face and his transactions hidden. Yet, using only openly accessible data, we were able to create a picture of some of his dealings. We plan to continue and monitor this man and we will remain loyal to the open data. In the game of Thai-boxer businessman playing on the verge of law, it is hard to get people to talk. But the data is always there, ready to tell the story when everybody remains quiet.

This article has been published as part of the Public Data Now project, supported by the The Royal Netherlands Embassy in Bosnia and Herzegovina.