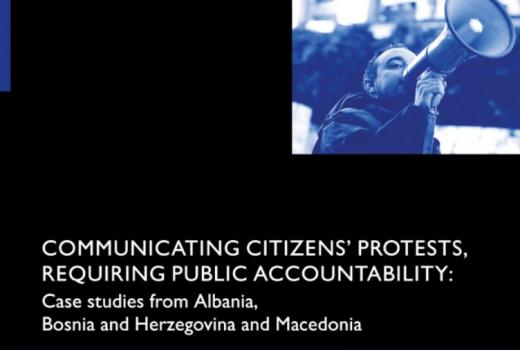 In the recent years, we have witnessed several protests, initiatives and social uprisings in the SEE region, through which the citizens demanded for government accountability, suggested better policy solutions and promoted better citizen participation.

The aim of the research is to understand how the government officials responded to the calls to accountability, what were the practices of citizens/activist in terms of promotion of the movement and its goals, and which role did the mainstream media took when reporting on the protests and social mobilization. Study volume contains an overview of the major results of the research in three countries, and three separate country reports.

The study finds that response to protests by both media and the government was rather systemic, with both failing to act in the public interest and to promote government accountability. Protests that included less criticism of the government structures received fairer media treatment, while the more anti-government ones attracted more controversial media converge (ranging from pro-government, more balanced, to supportive of protests) and framing that involved strategies of delegitimization of protests (mainly in BiH and Macedonia). But importantly, even when particular media provided fair representation of protesters (mainly case of dismantling chemical weapons in Albania), the media reports were superficial, lacking in-depth insights and analyses and substantial demands for government accountability.

Online platforms (social networks and some websites) are indicated as a space that provided more opportunities for self-mediation by the protesters and for accounts of protests independent from government representations, with some examples of online platforms being the only source of information about instances of police brutality for instance. Communication through online platforms, primarily Facebook groups and protest websites, proved to be crucial for the dissemination of information among the protest participants and for mobilisation to protest actions. However, beyond these immediate results, the online platforms seem to have had a limited impact in terms of the construction of meanings, confirming that mainstream media, above all television, still play a more decisive role. Interviewees, including the protesters themselves, are well aware of the importance of attracting mass media attention and assuring their positive treatment, in order for the protests to gain greater impact and long-term sustainability.

None of the country research reports indicates any relevant change of the accountability of officials in the course of the recent protests, or even in the way that accountability was discussed in the public sphere. The reactions of officials ranged from almost complete silence and ignoring the protests (in particular in first days of protests concerning the dismantling chemical weapons in Albania) to claims of political instrumentalisation (in BiH and Macedonia) and spin (through which protests were criminalised and delegitimized based on  (ethno)political divisions), and finally to appropriating the protest agenda (with some officials in BiH declaratively aligning with the protest demands while failing to take political actions to meet them). During the protests, officials engaged almost exclusively in one-way communication (statements, TV appearances, FB posts). Media outlets are reported to have underperformed by uncritically transmitting problematic statements and failing to actively re-examine government accountability in the light of the contestation by citizens.

Finally, some of the communication constrains were related to the features of the protests themselves (including horizontal communication, participation of diverse groups, diversity and inconsistency of protests messages and at times lack of experience in communication with the media etc). However, there were also valuable attempts of protesters to utilise different communication platforms, to introduce new actions and forms of protests (mainly plenums). In Albania,  government’s silence was utilized by the protesters to assert their claims in the mainstream media; In February protests in Bosnia and Herzegovina, protesters largely relied on media outlets identified as supportive of the protests to transmit relevant information; by drawing circles around their FB photos, the protesters in Macedonia mimicked a strategy of pro-government media in its intent to label them as politically instrumentalised, and thus in a simple way transformed a discrediting tool into a tool for self-mediation and self-promotion.

Policy memos providing insight into key findings of the research are also produced in each country, to be used as advocacy tool for improvements of communication practices in the context of social uprisings and requests for public accountability.

Study volume is available in English, individual country reports are made available in local language as well.