On the margins: Minorities and media in SEE 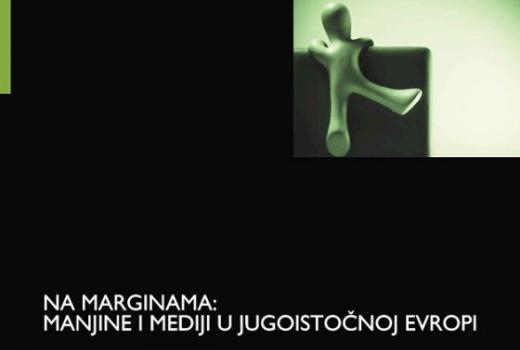 On the margins: Minorities and media in SEE

Mediacentar Sarajevo, in cooperation with the Center for Social Research Analitika, published in the first half of 2010 a collection of research papers on the relationship between minorities and media in SEE, titled “On the margins: Minorities and media in SEE,” edited by Edin Hodzic, Analitika’s Head of Research, and Tarik Jusic, PhD, Program Director of Mediacentar Sarajevo and Director of Analitika.

Mediacentar Sarajevo, in cooperation with the Center for Social Research Analitika, published in the first half of 2010 a collection of research papers on the relationship between minorities and media in SEE, titled “On the margins: Minorities and media in SEE,” edited by Edin Hodzic, Analitika’s Head of Research, and Tarik Jusic, PhD, Program Director of Mediacentar Sarajevo and Director of Analitika. As acknowledged in the introductory chapter, this book analyzes “three models of organization of the relationship between majorities and minorities in the media sphere,” pointing towards a whole number of problems: “the tension between the majority and ethno-cultural minorities observed through the prism of media representation of minorities in majority and minority media in a specific context (Croatia, Kosovo); the challenges of specific consociation mechanisms of power-sharing in pluralistic societies and challenges of guaranteeing of an adequate minority position in such societies, with a focus on the question of how the position of minority ethno-cultural collectivities is reflected in the media (Bosnia and Herzegovina and Macedonia), and mechanisms of discrimination, faulty representation and marginalization of gender/sexual minorities in the media, with a special focus on film and the Internet in Croatia, Bosnia and Herzegovina and Serbia” (Hodzic and Jusic 2010, 41-42).

In the introductory chapter, titled “Minorities and media in SEE: International standards and local practice,” Hodzic and Jusic provide an overview of the state of media rights of minorities, pointing towards specific contextual and media factors that influence the nature of the relationships between minority groups and media, with a special focus on the Balkans.

In the chapter “Minorities and media in Croatia: Reaching mainstream and avoiding marginalization,” Antonija Petricusic studies the preconditions of minority inclusion in minority and mainstream media in Croatia, emphasizing the risks of  ghettoisation of minorities if they rely on minority media only. The author points out that the legal provisions and institutional framework do not encourage the media enough to create a space for better integration of minorities in Croatia.
The paper “Serbs as a threat: The presentation of the Serb minority in Kosovo’s Albanian-language newspapers” by author Helena Zdravkovic-Zonta studies the relationship between majority Albanian media in Kosovo towards the Serb minority population, using critical discourse analysis of Teun A. Van Dijk. This analysis points towards a lack of real devotion towards reconciliation and integration in the discourse of Albanian-language media on the Serb minority in Kosovo.
Davor Marko, in his paper “Media and minorities in Bosnia and Herzegovina” on the representation of minorities in media points out that the BiH state does not fulfill even the minimum requirements for adequate minority access to media.
The paper by Zhidas Daskalovski, „The Bridges that divide: Media and minorities in Macedonia” analyzes the representation of the Albanian minority in Macedonian mainstream media, showing that the consociation structure of the media system does not succeed in eliminating the polarizing, centrifugal media discourse and in decreasing the ethnic tension at the symbolic, discursive level.
Mima Simic, analyzes in her paper “The border guardianess: Celluloid lesbian as a two-fold metaphor in the (re)construction of post-Yugoslav national identities,” the treatment of lesbian protagonists in the movies “Nice dead girls” by Dalibora Matanic (Croatia, 2002), “The border guard” by Maja Weiss (Varuh meje, Slovenia, 2002) and “Breath deeply” by Dragan Marinkovic (Serbia and Montenegro, 2004). She shows how these movies, on one hand, but only seemingly so, „express critique of the new militaristic, traditional, patriarchal and nationalistic discourse and practice,” while simultaneously reflecting in their subtext that same ideology, “which in the end prevents the establishment of the female/lesbian subject.”
Finally, Slobodanka Dekic, in her paper “Queer Online: the Queer community on the Internet and activism in Croatia, Serbia and Bosnia and Herzegovina,” studies the role of online fora, as part of regional LGBTIQ web portals, in networking, identification and political activism of this marginalized social group. Dekic’s research paper suggests that, besides the positive potential of new media to affirm the right of minorities to media access, new media can also be an additional mechanism for strengthening  marginalization of minorities.
The book was prepared as part of the project "Against the Margins," implemented by Mediacentar Sarajevo and financially supported by the British Embassy in BiH.
PDF version in BCS languages can be found here.