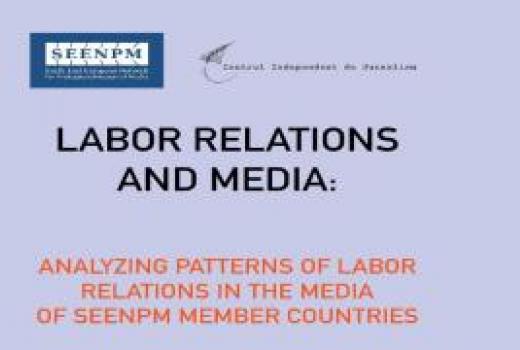 This publication is based on the results of the project “Labor Relations and Media:
Analyzing patterns of labor relations in the media of SEENPM member countries.”

The project, which was coordinated by the Independent Journalism Center-Moldova, aimed to evaluate the observance of labor laws in the media sector of South East European Network for Professionalization of the Media (SEENPM) member countries, to identify problems in the way labor laws are applied to so-called “typical” and “atypical” employees, to propose solutions for the problems identified and to share best practices throughout the region.

The following target groups were identified:

In-depth studies involving extensive primary and secondary research were carried out by the following country reporters:

Country reports focus on the legislation regulating labor relations in the media, the implementation of the legislation in practice (including the current status of typical and atypical media workers), censorship and self-censorship as an effect of labor relations as well as the existence and effectiveness of journalists’ trade unions. An important part of each report is the section on conclusions and recommendations which includes a general evaluation of the state of labor relations as well as proposals for major stakeholders with a view to improving the situation.

In addition to a country-by-country analysis, the present study also features a regional overview produced by Neva Nahtigal, media and labor relations analyst, Ljubljana. It provides a general context for the issues addressed including an analysis of major trends and policies in labor relations throughout the region and a study of relevant international treaties and directives. Key challenges facing media workers in SEENPM countries are reviewed, and specific patterns within the region are highlighted. Similar to the country reports, the regional overview contains a set of recommendations for major stakeholders.

Financial support for the project has been provided by International Media Support in Denmark.